At the beginning of the 1960s Ford was hatching a plan to develop a sporty and economical car for younger drivers. After various test prototypes, in 1964 an attractively designed coupé was shown at the New York international exhibition. It appealed to a wide public and was available at a reasonable price. The Ford Mustang took off like a bomb. In 1965, in addition to the Mustang, a sporty high performance 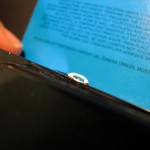 version, the GT 350 became reality. It was built by Carrol Shelby, with an upgraded 4.7 litre V8 engine that achieved 306 bhp, and therefore offered considerably more than the standard version. One of Shelby’s employees, Peyton Cramer, offered his Mustang GT 350 to Hertz to enable their customers to rent “racing cars”. Enthused by the performance package, Hertz ordered 1000 cars, most of which were supplied in 1966 in the traditional house livery of black bodywork with gold trim (800 cars), just like the one I (Aad) am building. 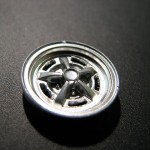 I started with a polystyrene kit of the 1966 Shelby Mustang GT 350H (H for Hertz) manufactured by Revell®. After doing some research and taking a critical look at some photographs I had to do something about the details on the model kit that either did not exist or were incorrect. I altered for example the door handles, exhaust tips, grill, steering wheel (photo 3), rims (photo 4) and much more. For this I used different photographsand videos as evidence. My enhancements to the kitalso include the use of photo-etched brass (photo 5).

The door handles were not open, so I had to cut the inside out of them. The steering wheel did not contain itsholes, so I drilled them out, as well as the wheel rims. 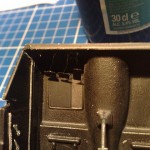 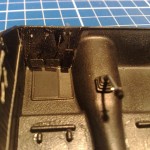 I bought the PE-kit online from an American company (www.modelcargarage.com). I will go into more detail about these photo-etched parts later, when I come to use them.

I have recently finished making and applying the pedals. I managed to glue pieces of metal wire to the back of the (photo-etched) pedals. After that I painted the pedals silky matt black and attached them to the model by drilling a small hole and sticking the pedals into them. They were then sealed with superglue and bent into the right positions. For the overall result see photo 6 (apologies for the bad quality). 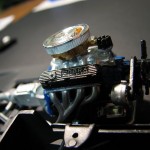 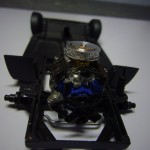 The ignition coil and engine hoses are finished (see photo 7). You can see a larger picture when you click on the photo.

Things that will be altered in the near future include the  grill, armrests, heating hoses, lines from the battery and windscreen fluid etc.

This entry was posted in 1966 - Shelby Mustang - 1/24, Current Projects. Bookmark the permalink.