Torpedo launching system
After considerable trial and error a system to launch the torpedo’s out of the tube modelled on the original compressed air system has been devised. Air is compressed into a PVC tube and held there by a solenoid valve. The valve is then attached to the torpedo tube. When opened by a electric switch the torpedo is pushed out of the tube by the compressed air. It took some effort to compete a system which was free of leaks, but it now works perfectly at a pressure of 7 bar. To view the test on YouTube click here. 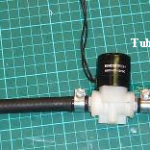 Hull
The right and left bow units of the hull are finally ready to receive an undercoat prior to assembly. The weld line has also been added using microstrip which was glued and then bevelled with a power tool. Cutting out the flood holes 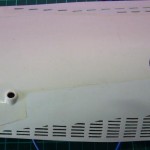 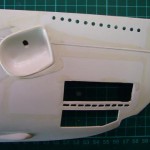