Bow
The last few weeks we have mainly worked on the bow. The torpedo doors have been attached with small brass hinges. The doors were then moulded into the form of the hull. The bow section has been temporarily assembled with tape in ordere to prepare everything for assembly. In this process we discovered that the bow-front was too wide. This has been corrected. The gradual widening of the deck has been determined from the plans of 1940 (the decks provided by Robbe will be replaced).

New couplings for the torpedo system

Torpedo system
We have also worked on the torpedosystem and installed beter connectors between the solenoids and torpedotubes. We are also hard at work on the design of the torpedo’s themselves, which will replicate the G7e type. 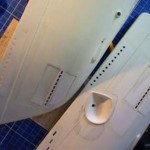 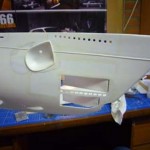 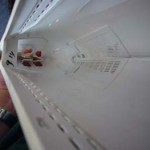