Frontplanes and Anchor Mechanism
As is often the case, when one actually gets down to turning plans into parts, the plans get modified and new possibilities emerge. This has happened with the anchor mechanism at a rather late stage. As Ian was busy creating the webshop design for the anchor mechanism (which has a good working prototype) he received a brainwave for a simpler design accomplishing the same things, but using only one motor instead of two. We await in awe the construction of a new prototype!

A similar development occurred in respect of the frontplanes and their armature. We hope now to produce a version which will be both stronger and adaptable to slightly varying boat sizes. Our frontplane mechanism is designed to be both exactly to scale and to leave plenty of room for four working torpedo tubes.

Firstly the setup is checked with a dial indicator (mounted on a home-made holder):  Checking the setup

Next a hole is drilled in the tail section for the axles: 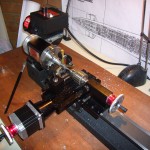 The tail section is then cut in the lathe and parted: (Click here)

And here is the result! 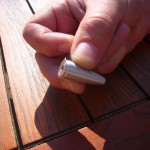