Our project here was originally conceived as the transformation of a Robbe U-47 kit (incorrectly labelled as a VII C, — the U47 was in fact a VII B) into a static diving submarine complete with exploding torpedo’s, underwater camera and lighting and various other bits of electronics. During the process however, we discovered that the Robbe kit is much too inaccurate to use. Only the hull parts will be utilized by us and even these need to be seriously modified. We hope to include the following electronics:

Although only 24 VII B’s were built (compared to 660 of the VII C), it was this model of Unterseeboot (submarine) which was used by the famous early aces such as Günther Prien (of the U47). The VII C was lengthened midships by 60 centimetres. The conning tower of the (early) VII C was also lengthened by 3 cm. and widened by 6 cm.. Extra ventilation ducts were also added to the tower.  So-called conversions of the Robbe kit to a VII C by adding a different conning tower and deckplates (for example such as proposed by Dream-Arts) neglect the lengthening of the hull.

The VII B was rated for diving up to 100m which at a scale of 1:40 is 2.5m. Our U-boot should easily attain this depth and probably much more.

We have spent much time researching, theorizing and tooling up (see the test pond). Since March 1st 2010 we have begun the actual building process, although we still need to ponder whether to incorporate a working periscope, and exterior lighting.

The first task is the assembly and modification of the hull. Unfortunately the hull supplied by Robbe is not accurate. The stern will need to be shortened and modified. The bow also needed modification. The position of the anchor bay was incorrect and this was cut out, moved towards the bow and mounted so as to jut out a little and form a ridge around the bay. In addition both the number and the size of all the flooding holes are incorrect (they are all too large). This necessitates that we make entirely new panels for correct flooding holes. In addition we hope to add a set of rivets manufactured by Dream-Arts.

The easiest conversion to static diving of this kit is to fit a small diving tank into the inner watertight tube provided. To date this seems to be the only way builders have modified the kit. This however provides a very limited diving depth and does not leave room for the many other additions we wish to make (see list above). Therefore we have decided to do away with most of the internal parts of the kit and to make the entire hull watertight, giving access to it by a coverplate mounted at the level of the main flooding holes (which will work as per the original boat). This means mounting the three parts of the hull (stern, midship and bow) together into one piece. These parts will be strengthened by fibreglass and provided with a ribbed skeleton of wood to give the hull the necessary stability.

On the following posts you will find a number of photos of the building process together with dated updates on the work. 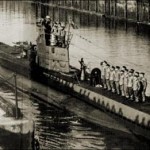 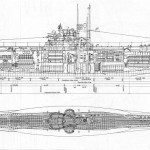 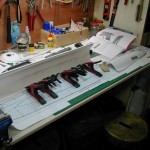 New plates for the floodholes are made 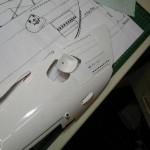 The anchor bay is moved forward A new plate for the floodholes