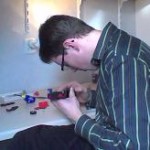 In the very beginning Aad started modelling at his own desk (Figure 1). Later on he moved his work to the shed, where the big stuff began. Some time later Dean recalled himself modelling when he was still a young boy and started building the K5 Eisenbahngeschütz. Our hobby escalated and we transformed the shed into a very functional workshop.Since then Dean has moved to Australia with much of the equipment and is busy forming a new Australian team in addition to the team here in the Netherlands. The new  workshop (Figure 2) is also kitted up with a variety of suitable tools. We have constructed our own spray-painting booth (Figure 4) with built-in air-suction, turntable and several other features. An air-brush cleaning tray is situated directly underneath. We have also constructed our own vacuform unit (Figure 3) in order to be able to make vacuum moulded parts from plastic sheet. It is the ultimate kit-conversion, involving the transformation of an old bedside table. We hope also to try our hands at making our own photo-etched parts and designing and printing our own decals. Metalworking is done with a Sherline CNC mini-lathe and CNC mini-milling machine as well as a fully equipped Hembrug toolmakers lathe, complete with digital readout. Finally, Dean has also built a new test pond (6m x 6m x 3m deep, see Figure 5). 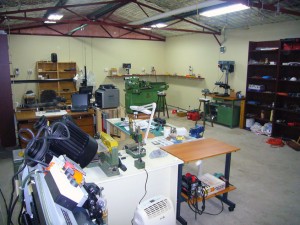 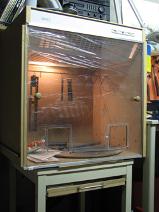